The headline is what I think Apple should have called the app that was released earlier this week. Mark Dascoli (who works for us at fxphd) and I were chatting about this at work. We both felt that much of the whingeing about the new Final Cut X that’s been going on could have been avoided through a more well thought-out roll out that managed expectations through a tiered product line.

With all the negativity out there I feel like I have to apologize, but even with only a couple days in the app, I’m finding a lot of things I like about it. What’s truly getting lost in the discussion is that there’s actually some really cool stuff in the software. From a start, it certainly seems speedy and the background processing and 64-bit multiprocessor support really helps make things flow. Even Motion got some nice updates, including sharable presets called widgets and templates. 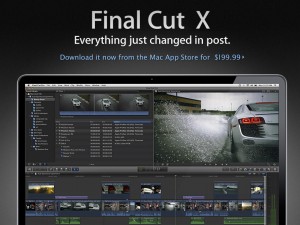 I respect the fact that Apple is trying a new interface and approach for a non-linear editor. I think it’s high time that someone has done that and I’m glad that they’re taking a stab at it. I’m game to see if there is a new approach that actually lets us edit faster and be more flexible and creative. I’m also pretty sure that creating a new editing program is difficult, otherwise we’d have more of them.

Together these things pretty much ensure that V1 is gonna have some hitches…and I’m willing to deal with them if it means something positive in the long run. A complete rewrite of the software means you don’t just easily lift code from a mature product — you have to re-write it — hence, the V1 moniker. But hitches are one thing…serious workflow omissions in a “pro” product are another.

But with that being said, I’m checking it out with an open mind to improvements in the future. At least one that is focused on our needs at fxguide and fxphd, which is editing and finishing for web delivery. The only sure thing I can say right now is that I’d miss Magic Bullet Colorista II….that can’t come soon enough.

Examining those specifics further is another post as I need more time in the software.

For now, I’d simply like to contrast what actually happened with what could have happened. I think breaking the product line into two would have made a big difference in managing expectations. Get the software out now as it is and then release a higher end version later this year. Especially since Apple has already (supposedly) revealed that several lacking “pro” features will be out in a software update. Leave the venerable Final Cut Studio available and shipping as it works and there’s no pressing need to change. Release Final Cut X as it is now and put out the following press release which speaks to the future:

CUPERTINO, California—June 21, 2011—Apple® today released Final Cut X, a revolutionary new version of the world’s most popular video editing software which completely reinvents video editing.  Apple® also announced that Final Cut Pro X, an advanced version with features targeted towards the professional market, will ship later this year.  Built on a modern 64-bit architecture, Final Cut X is now available from the Mac® App Store™ for $199.99. Final Cut Pro X when its released will be available from the Mac® App Store™ for $399.00 or a $200 upgrade from Final Cut X.

“Final Cut X is the biggest advance in video editing since the original Final Cut Pro,” said Philip Schiller, Apple’s senior vice president of Worldwide Product Marketing. “We have shown it to many of the world’s best editors, and their jaws have dropped.”

“I’m blown away by what Apple has done with Final Cut,” said Angus Wall, Academy Award-winning film editor. “Final Cut X is incredibly modern and fast, but most importantly it lets you focus on telling your story in the most creative way, while it actively manages all of the technical details.”

Completely rebuilt from the ground up, Final Cut Pro X is a 64-bit app that takes full advantage of the latest Mac hardware and software so you never have to wait for the next edit, even if you’re working with 4K video. Final Cut Pro X uses multi-threaded processing and the GPU on your graphics card for blazing fast background rendering and superb real-time playback performance. Additionally, a ColorSync-managed color pipeline ensures color consistency from import to output.

Final Cut X also includes powerful tools for audio editing and color correction, and is complemented by two companion apps, Motion 5 for professional motion graphics and Compressor 4 for advanced media encoding, available from the Mac App Store for $49.99 each.

The professional version, Final Cut Pro X, will be available later this year. It will include features targeted specifically towards pro users, including:

“We’re excited about the high end features in Final Cut Pro X,” said Philip Schiller, Apple’s senior vice president of Worldwide Product Marketing. “We’re especially excited about the fact that we don’t have to waste time developing video i/o — because tape based workflow is something for mimes of the past, not tech-saavy professionals.”