As the summer heats up, I’ve been wanting to ride my bike into work but I don’t want to have to worry about lugging my MacBook Pro along with me. Was there a way I could fairly easily and effectively make sure that each location had each and everything thing I needed? Or at least most everything. There are many ways to sync, backup, mirror, etc, so I went about researching the best ways to make this happen.

The first thing I needed to do was to identify the various issues that I had to deal with:

The first thing I started working on was email. I had switched to using gmail as my email hub about two years ago. I have various addresses from fxguide to fxphd, but they all end up forwarding to gmail. I did this simply because I found the spam filtering to be far superior to anything else I had experienced using, including client side plugins such as SpamSieve. Google effectively filters 99.9% of potential spam with no false positives. That’s more than good enough for me.

My goal was to continue to use Apple’s mail client on each of my machines. Why rely on Mail.app? I like the ability to access my email offline, such as while traveling, as well as archiving it to a database archive (using Mail Steward). So for these reasons and the lack of time to explore even more options, I didn’t 100% rely on the web client.

I use a ton of filters in Apple Mail to organize my email into folders based upon their content and sender — from fxguide admin emails, support emails to fxphd, personal subscriptions, and mailing lists. They all get a specific folder and I can directly see in the UI how many new messages their are of various types. Previously, I had placed these folders “On My Mac”, which wasn’t a problem when using one main computer. However, I wanted to be able to have these folders on each of my OSX systems. 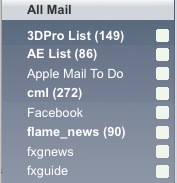 On Gmail, there really isn’t a concept of “folders” and instead they use “labels”. Luckily, Apple Mail shows GMail “labels” as folders — so all I had to do was move my local folders under the GMail hierarchy. This was as simple as dragging and dropping the folder within Mail.app. I still initially left the filtering on my Mac and not on Gmail — but this had the effect of both filtering the emails locally as well as adding Gmail labels. The great way about this solution is that due to IMAP functionality, the folders would effectively appear on any mail client I used. These emails would also appear on my iPhone and iPad in the correct folders as well as in the GMail web UI.

A word of warning. There is a ton of syncing and communication between the server and local machine when moving a folder from “On My Mac” to Gmail. I have mailboxes with thousands of messages in them, so it was important that I moved one mail folder at a time and let the process complete. Once I moved the folder, I would then modify the respective filter in Apple Mail so that it would use the “folder” on Gmail. Only then, after ensuring the filter worked, would I delete the folder from “On My Mac”

I have begun to transfer all filtering from my client application to directly in Gmail….more on that in the next post.