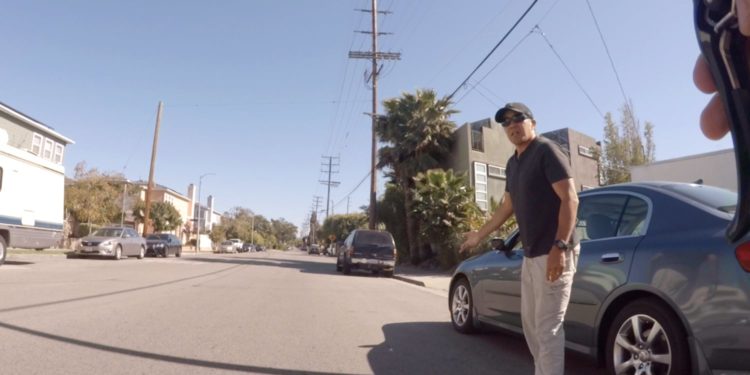 I was riding in Venice and had a bit of a scary encounter with a driver who showed an incredible lack of interest in my safety and well being. I was headed south down Penmar, looking to turn left onto Palms. And here is what happened…

The reality is that I was exactly where I should have been riding on the street: legally and safely. The driver, on the other hand, pulled up so close to me at the stop sign where I was aiming to turn left that I actually ran into him as I was setting up for my turn. Among other things, he was in the opposing traffic lane at the stop sign and also passed dangerously close to me, well under the 3-foot minimum that is generally required under law (it does allow for cars to pass closer under certain circumstances).

He then proceeded to verbally attack me:

“Yeah you fucking did and you got all that room on the side. You’re fucking giving us riders a bad name.”

Well, he’s not much of a cyclist if he doesn’t know the law. The reality is, there is absolutely no requirement for me on this street to ride any further to the right than I was.

Why shouldn’t I have been riding further to the right?

First of all, you can see from the video that there are cars parked on the right side of the road. My aim is to avoid being in the “door zone” — or the region in which a driver card door might open, causing me to run into it without any room to avoid it to the left.

What about riding further to the right where there aren’t cars and then moving to the left to move further away from the cars?

This is a actually something that can confuse drivers and make things dangerous for cyclists. The first is that the weaving left and right makes our behavior unpredictable to those in cars; traveling in a straight, predictable line is much better for drivers to understand our intent when riding. In addition, drivers don’t give way to cyclists who move from the curb zone to the lane to avoid cars. This is one of the easiest ways to be hit by a car, as generally our rear-facing view needs to be done with a head turn and we can easily be caught by surprise (as I was at the stop sign when he pulled up next to me in the other lane).

Another factor here is that lanes on Penmar aren’t wide enough to safely contain a bicycle and a car with safe room to pass. This is actually part of the California Vehicle Code (CVC 21202):

(a) Any person operating a bicycle upon a roadway at a speed less than the normal speed of traffic moving in the same direction at that time shall ride as close as practicable to the right-hand curb or edge of the roadway except under any of the following situations:

(1) When overtaking and passing another bicycle or vehicle proceeding in the same direction.

(2) When preparing for a left turn at an intersection or into a private road or driveway.

(3) When reasonably necessary to avoid conditions (including, but not limited to, fixed or moving objects, vehicles, bicycles, pedestrians, animals, surface hazards, or substandard width lanes) that make it unsafe to continue along the right-hand curb or edge, subject to the provisions of Section 21656. For purposes of this section, a “substandard width lane” is a lane that is too narrow for a bicycle and a vehicle to travel safely side by side within the lane.

Finally, I wasn’t riding further to the right because I was planning on making a left turn at the stop sign. Though in the shell shock of the encounter I forgot to actually turn!

The bottom line is that I was riding exactly where I should have been. Safely and legally.

The kicker was that the driver passed me dangerously after the stop sign and then pulled over, inviting me to pull over and “kick my ass.”

One Response to “Driver arrogance and cyclist endangerment”