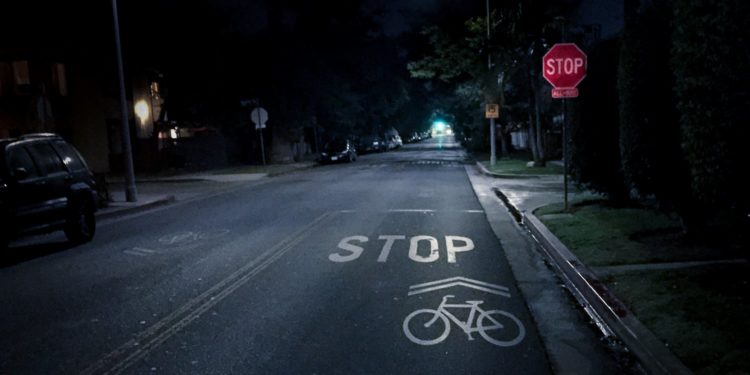 I don’t know why I’m still surprised when I read posts on the internet of drivers freaking out when they see cyclists breaking the law, but I am. It stands in stark contrast to the the fact that I can’t remember the last time I saw a post by drivers critiquing other drivers for law-breaking or bad behavior.

For some reason, seeing a cyclist break the law causes drivers’ heads to explode. My gut reaction to the visceral nature behind the complaints is that drivers don’t actually feel cyclists belong on the roads — we’re generally a nuisance that get in their way. But the fact is, the roads are for everyone and cyclists don’t actually break the law any more than drivers do. They simply break it in different ways.

Before I continue, I’ll admit that I’m just as annoyed at asshole cyclists as I am asshole drivers. This morning I was at yelled at by another cyclist who blew through a stop sign and almost ran into me after I had stopped and then entered an intersection while riding. Yeah…I’m the ass. Whatever.

While we can all admit some cyclists are annoying, the reality is that I see a tremendous amount of law breaking and dangerous behavior from drivers, often times putting my life in jeopardy. Just check out some of my posts on this blow. The California Office of Traffic Safety reports that from 2012 to 2014, drivers in California killed over 2000 pedestrians and almost 400 cyclists. Contrast that with the fact that one cyclist killed a pedestrian over the same time period (San Francisco, 2012). The facts clearly show that the mass of vehicles and their speed have a far greater likelihood of killing those less vulnerable, so why aren’t drivers focused on them? Because they’re insulated in their metal chambers and succumb to what’s called “the windshield perspective” or the inability to view the situation from any other perspective than their own.

I hear all the time from people how arrogant cyclists break the law all the time. But anecdotal evidence aside, they don’t. The reality is that cyclists don’t break the law any more than drivers do, they simply do it in different ways. A point of comparison might be that cyclists might run through a stop light but cars speed. A 2013 Portland State University study found that drivers are far more likely to break the law speeding than cyclists are to run a red light:

Nearly 94 percent of people riding bikes in Portland, Beaverton, Corvallis and Eugene stopped for red lights, a forthcoming Portland State University-based study of 2,026 intersection crossing videos has found. Of those, almost all (89 percent of the total) followed the rules perfectly, while another 4 percent entered the intersection just before the light changed to green.

Only 6 percent of riders were observed heading directly through the red light.

That compares to, for example, an estimated 36 percent to 77 percent of people who tend to break the speed limit when driving a car on local streets, according to previous, otherwise unrelated research.

As far as drivers, Californians even have a special name for the action of not stopping at red lights while turning: the California Stop.

There’s more research that cyclists don’t deserve to be called ‘scofflaws” any more than drivers do. Researcher Wesley Marshall surveyed over 18,000 people and found parity between cyclists and drivers regarding breaking the law, but not the reasons for doing so:

The study gathered similar rates of infraction — 8 percent to 9 percent for drivers, and 7 to 8 percent for cyclists. And when Marshall researched the reasons a cyclist might break a traffic law, it turns out they are doing it for nearly the same reasons that a driver would, but with one difference.

Drivers and pedestrians will drive through or walk against a red light to save time.

“They’re not trying to be reckless or rude,” Marshall said. “Cyclists, they’re doing it for their own personal safety or perceived safety. They felt like they’re more visible.”

On a transportation grid designed with cars in mind, Marshall says cyclists are acting on what they perceive is better for their safety. It is a rational choice in a cyclist’s decision-making, he said. At a red light with no other cars crossing, a cyclist can get a head start on the next block.

“It’s interesting that you would break the law to feel safer,” Marshall says.