I’ve been working with OS X Lion installed on my MacBook Pro for the last several weeks and the experience has been incredibly painless. It’s not my main “production” workstation as I’m still using a MacPro tower at work for Nuke (Nuke 6.3v1 does not run under Lion) and Smoke and large scale projects. But I still use various mainstream desktop apps such as Adobe CS5.5 and do my main web development on the MBP. I listed the main apps I use on my MBP below.

I thought I’d put together some initial thoughts and suggestions. It’s not meant to be a full up review — for that go, to a professional such as John Siracusa’s review at Ars Technica whose reviews are always incredibly in-depth.

That being said, here’s a quick overview of my initial thoughts/suggestions I feel you might find useful….

Utterly painless for me. As always, I did a full clone backup of my system using Carbon Copy Cloner just in case the worst happened. It didn’t. Since my MBP was only 4 months hold, I simply did the App Store install and it worked quite well. Make sure you backup before installing — never hurts.

The biggest hurdle in Lion for me has been the reversal of scroll direction to match the iPad/iPhone touch UI. I use a three button mouse with a scrollwheel (will Apple ever learn to build a real mouse?) and it has been a tough transition to simply change behavior. There is a preference to change it under System Preferences track pad. However, I actually think this change is a good one moving forward and simply takes some getting used to. It makes more and more sense and there have been quite a few improvements in multi touch which make it a very useful part of the notebook experience.

A big app in the business is Nuke — and as I mentioned above it does not run on my Lion MBP. I’ve found bugs when using applications such as After Effects (10.5), Photoshop (5.1), Final Cut Pro, and others. But no “showstoppers” as we call them in bug testing. I’ve updated quite a few applications in the last few weeks as developers have released Lion updates — but very few apps had serious problems. Among theses were QuickBooks — which couldn’t print — and Yummy FTP — which wouldn’t connect to SFTP servers. But both have updates out now and they’re working fine.

I use Path Finder as a Finder replacement and it’s Desktop doesn’t work with the new Mission Control. But I’ve simply hidden the Path Finder desktop and all is well.

Primary applications which work for me under Lion include:

The install of Snow hides the user’s home Library directory. I think this makes sense for most users, but it caught me off guard as I do access the directory. The easiest way to “unhide” it is to type the following in the Terminal: 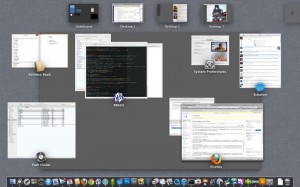 Gone is Expose and Spaces as we know them — and enter in Mission Control. One major change is the removal of the ability to have a 2×2 or other grid like spaces setup. Spaces are all now in a single row. I’m not quite sure of the reasons behind this, as it was really quite nice and seems as though it could fit in with the new Lion paradigm. But it’s gone, and I have to say that I’ve gotten used to it over the last couple of weeks. Some tips to ease the transition:

I like the changes in Apple Mail quite a bit. Having switched to using Gmail for my email hub (as I described here), I have less and less of a need for handling multiple accounts. And with the release of Sparrow 1.3, I’ve switched to this app and the Gmail web UI. I simply love the simplicity cleanliness of Sparrow. My main critique of it at this point is that search needs to be improved, but I’ve been turning to the web UI when needed.

The new UI for these two apps is horrendous. Not only do I dislike the idea of mimicking a physical Day Planner in a computer UI, it actually gets in the way of interactivity. The calendar page turns seriously slow down navigation between months if you want to quickly page through several months at a time. Grr.

In closing, one feature I’ve found little use for is Launch Pad. But I think this is mainly because of an indispensable utility I use under OS X: Alfred. It makes finding and opening apps and docs so easy…I hardly ever navigate through my Applications directory or even use the Dock. I’ve basically reassigned the Spotlight Command-Spacebar shortcut to Alfred. To open an app, all you need to do is press Command-Spacebar, type af and

Try it. It’s free. And your life will never be the same.

One Response to “initial thoughts on OS X Lion”