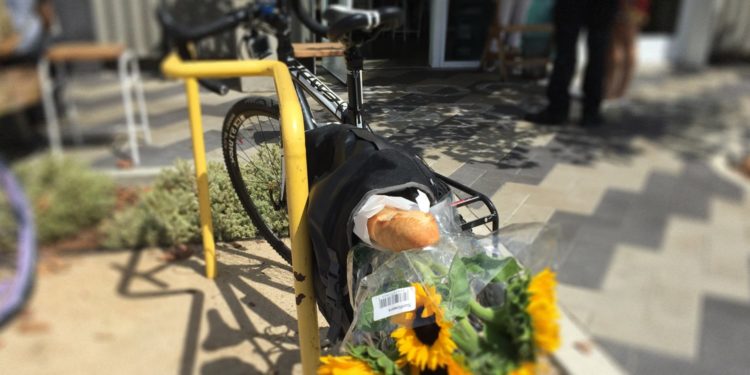 One question I get about not owning a car is “How do you shop if you don’t have a car to put everything in?” The answer is pretty simple: it just takes a bit of adjustment. The photo above is taken at Superba, with my pannier loaded with a baguette and sunflowers for my love.

Groceries are pretty easy. I have a weekly farmer’s market walking distance from my house on Friday and another one in Mar Vista on Sunday, so each week I make a trip to each to stock up. I don’t mind at all, especially having moved to Venice from Chicago where we had a tough time getting decent quality veg all year long. I especially like supporting the (relatively) local produce, meat, and other food producers instead of the big chains.

As far as general groceries for meals, I make several trips a week instead of one big trip every week or two. It works out really well because anything I buy is generally fresh and consumed relatively quickly with little waste. That photo for this story makes me smile — it feels very Parisian, with a fresh baguette in my pannier. In addition, I get the benefit of further exercise and clearing my head by taking multiple trips on my bike.

I’ve also found I frequent local merchants a lot more often than I used to in the past, shopping at Lincoln Hardware or Helen’s Cycles instead of Home Depot and Performance Bike.

What about larger goods like paper towels, detergent, or other things? I’ve become a fan of Amazon Prime Pantry. About once a month I fill up a box with various staples and it ships right to my house. I don’t need to do it often, so I’m less concerned about the environmental impact as well as not supporting local merchants.

Finally, when I need to I simply rent a car (or borrow a friend’s car).