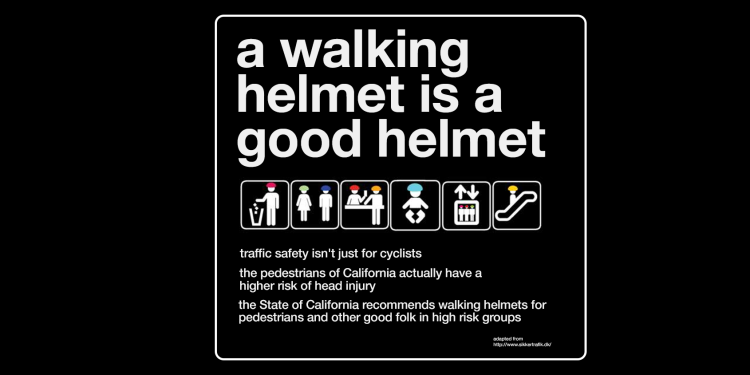 California state Senator Carol Liu’s introduction of SB 192 got me thinking. Why stop at cycling in a misguided attempt to save lives? If we all work together, we can use mandatory helmet laws to also falsely attempt to reduce the vast number of pedestrian fatalities. After all, there were 4,743 pedestrian fatalities nationwide in 2012, compared with 726 bicyclists.

And why stop there? There were over 22,000 people who died while vehicle occupants. Surely had they been wearing a helmet, numerous lives would have been saved.

To that end, I’ve taken inspiration from a Danish campaign I found on the Copenhagenize site (a fantastic site, by the way). If you’d like to help support a good cause, update your avatar or icon with this downloadable English adaptation of the poster.

But you’ll need facts to support the cause, so here are a few:

Time to spread the word!